Antonio Claret was born in Sallent (Barcelona), about 15 kms from Manresa, in 1807, in the bosom of a deeply Christian family, dedicated to the textile manufacture. 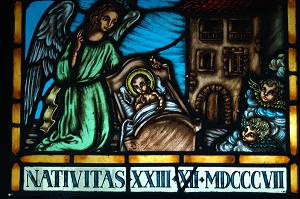 The childhood of the saint did not pass with total tranquility. The Napoleonic War, the influence of the ideas of the French Revolution, the oath of the Constitution of 1812, and the tensions between absolutists and liberals marked in some way the life of the saint. In the religious aspect is marked by the experience of the providence of God on the one hand; And by the idea of eternity, on the other. His piety is influenced by the devotion to the Virgin Mary and to the Eucharist. 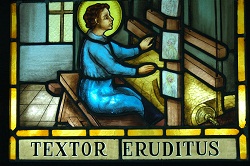 At the age of twelve, his father puts him to work on the family loom. Recognizing his ability to manufacture, he goes to Barcelona to improve himself in textile art.

He dedicates himself with true passion to work; He lived for him day and night.

His prayers, however, were not so much or so fervent, though he did not leave the Sunday mass or prayer of the Rosary. Little by little he is forgetting the childish desire to be a priest, but God was directing him according to his plans. A hard disappointment, and above all the word of the Gospel what’s the point of winning the whole world if he loses his life in the end, shakes his conscience. Despite the offers to mount his own factory, he refuses to satisfy his father’s desire and decides to be Carthusian.

At the age of 22 he entered the seminary of Vic, without losing sight of his intention of being a Carthusian monk. When he goes to the Cartuja de Montealegre, the following year, a storm forces him to retreat and his dream of life withdrawn begins to fade. He continues his seminarísticos studies in Vic. He suffers a strong temptation against chastity, in which he recognizes the maternal intercession of the Virgin Mary in his favor and above all the will of God, who wants him missionary, evangelizer. 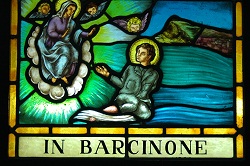 Although he had not completed theological studies, on June 13, 1835 he received the priestly ordination because his bishop saw something extraordinary in him. He is in charge of his native parish, Sallent. But the parish wasn’t his thing. He feels, more and more strongly, that the Lord calls him to evangelize. The political situation in Catalonia, divided by the civil war between liberals and Carlists, and that of the church, subjected to the distrust of the rulers, left no other solution than the one to leave their homeland and to offer themselves to Propaganda Fide, commissioned then of all the Work of evangelization of any kind.

After a journey full of dangers, he arrived in Rome. He took a few days that he had free to do spiritual exercises in the house of the Gesù of the Jesuits. His director encouraged him to apply for entry into the company of Jesus. At the beginning of 1840, four months after the novitiate began, he is suffering from intense pain in his right leg that prevents him from walking. God’s hand is made to feel. The Father General of the Jesuits said to him with resolution: it is the will of God that you go soon to Spain; Don’t be afraid; Mood. Again in Catalonia, the parish of Viladrau is entrusted to him. Being well-served, you can travel to give missions and exercises in nearby populations. His bishop, who knows the Claretian vocation and the fruits of his preaching, leaves him free from all parish bondage to be able to evangelize from people to people. By the desire of communion with the hierarchy and the pastoral faculties that he behaved, he asked Propaganda Fide for the title of “Apostolic Missionary”, which he filled with spiritual and apostolic content.

Apostolic Missionary in Catalonia and the Canary Islands

Again in Catalonia, the parish of Viladrau is entrusted to him. Being well-served, you can travel to give missions and exercises in nearby populations. His bishop, who knows the Claretian vocation and the fruits of his preaching, leaves him free from all parish bondage to be able to evangelize from people to people. By the desire of communion with the hierarchy and the pastoral faculties that he behaved, he asked Propaganda Fide for the title of “Apostolic Missionary”, which he filled with spiritual and apostolic content. 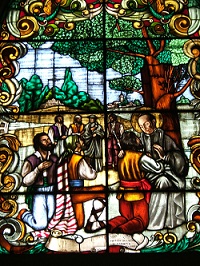 He traveled almost all of Catalonia from 1843 to 1847, preaching the word of God, always on foot, without accepting money or gifts for his ministry. The Imitation of Jesus Christ moved him. Despite his political neutrality, he was soon to suffer persecution on the part of the rulers, and slanders of those who fought the faith.

But San Antonio Maria Claret was not to be just a tireless preacher of missions to the people and exercises to priests and religious. Soon it is discovering other means of apostolate more effective: It published prayer book, small bookletss directed to priests, religious, children, young, married, parents of family…; He founded the religious bookstore in 1848, which in two years released 2,811,000 copies of books, 2,059,500 booklets and 4,249,200 flyers.

Because it was impossible to preach in Catalonia because of the armed rebellion, his bishop sent him to the Canary Islands. From February 1848 to May 1849 he toured the islands. Soon and familiarly he began to call him “the Padrito”. So popular was made that it is copatron of the Diocese of Las Palmas with the Virgin of the Pino.

Founder and Archbishop of Cuba 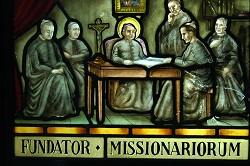 De back already in Catalonia, on July 16, 1849, founded in a cell of the seminary of Vic the congregation of the Missionaries Children of the Immaculate Heart of Mary. Claret’s great work begins humbly with five priests endowed with the same spirit as the founder. A few days, on August 11, they communicate to Mossen Claret His appointment as Archbishop of Cuba. Despite his resistance and his objections to the religious bookshop and the newly founded missionary congregation, he had to accept that charge for obedience and was consecrated in Vic on October 6, 1850.

The situation on the island of Cuba is deplorable: exploitation and slavery, public immorality, family insecurity, disaffection to the church and, above all, progressive dechristianization. Just come to understand that the most necessary is to undertake a work of renewal in the Christian life and promotes a series of missionary campaigns, in which he participates, to bring the Word of God to all villages. He gave his episcopal ministry a missionary interpretation. In six years he went through three times his entire diocese. He was concerned with the spiritual and pastoral renewal of the clergy and the founding of religious communities. For the education of youth and the care of the welfare institutions, the Escolapios, the Jesuits and the Daughters of Charity were able to establish communities in Cuba; With M. Antonia Paris founded the Nuns of Mary Immaculate missionaries. 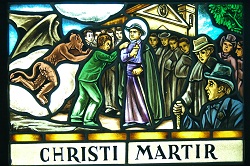 Claretian on August 27th, 1855. He fought slavery, created a farm-school for poor children, put a savings bank with a social character, founded popular libraries. So much and so diverse activity entails confrontations, slanders, persecutions and attacks. The sufferer in Holguín (1 February 1856) almost cost him his life, although he makes him shed his blood by Cristo.La Queen Elizabeth II personally chooses him as his confessor in 1857 and is forced to move to Madrid. He must attend at least weekly to the court to exercise his Ministry of Confessor and to take care of the Christian education of Prince Alfonso and the Infantas. Due to its spiritual influence and its firmness, the religious and moral situation of the Court is gradually changing. He lives austere and poorly.

Confessor of Queen Elizabeth II and apostle in Madrid and Spain

Queen Elizabeth II personally chooses him as his confessor in 1857 and is forced to move to Madrid. He must attend at least weekly to the court to exercise his Ministry of Confessor and to take care of the Christian education of Prince Alfonso and the Infantas. Due to its spiritual influence and its firmness, the religious and moral situation of the Court is gradually changing. He lives austere and poorly. 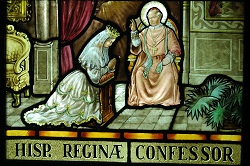 The Palace ministries do not fill the time or the Apostolic Spirit of Monsignor Claret: He exercises an intense activity in the city: he preaches and confesses, writes books, visits prisons and hospitals. Take advantage of the trips with the Kings to Spain to preach everywhere. It promotes the Academy of San Miguel, a project in which it aims to unite intellectuals and artists so that they “associate to promote the sciences and the arts under the religious aspect, to unite their efforts to fight the errors, to propagate the good books and with them good doctrines. “

The Queen appoints him protector of the church and of the hospital of Montserrat of Madrid, and in 1859 president of El Escorial. Its management can not be more effective and broader: restoration of the building, equipment of the church, establishment of a community and a seminar.

One of his greatest worries will be to equip Spain with jealous bishops and to protect and promote consecrated life, especially that of the institutes founded by him, the missionaries and the Nuns of Mary Immaculate, or others. 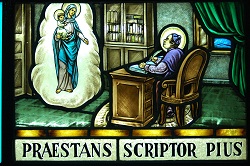 He jealously maintains his independence and political neutrality always, which brings him multiple enmity. It becomes the target of hatred and vengeance of many: “Although I have always been with caution in this area-it refers to favoritism-, I have not escaped from bad languages,” he confesses. His union with Jesus Christ reaches a climax in the grace of the conservation of the sacramental species bestowed on the farm of Segovia on August 26, 1861.

Exile and Father in the Vatican Council I

Following the September 1868 Revolution, he is part of the Queen’s exile. In Paris he maintains his ministry with the Queen and Prince of Asturias, founded the lectures of the Sda. Family and is lavished on multiple apostolic activities. 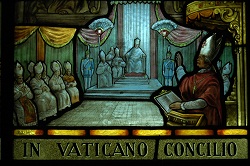 For the celebration of the priestly Golden Jubilee of Pope Pius IX goes to Rome. Participates in the preparation of Vatican Council I, which intervenes defending the papal infallibility. At the end of the sessions, with the health already very broken and presuming next his death, it moves to the community that its missionaries have in Prades (France).

So far their persecutors arrive, who intend to seize him and take him to Spain to judge and condemn him. He must flee like a criminal and take refuge in the Cistercian monastery of Fontfroide. 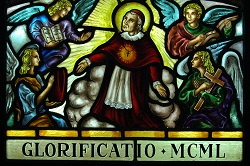 In this monastery of Fontfroide, at 63 years old, surrounded by the affection of the monks and some of his missionaries, he died on October 24, 1870.