Seville, Spain. From February 21 to 23, 2020, members of the Claretian Family Coordinating Team gathered at the house of the Daughters of the Holy and Immaculate Heart of Mary – Cordimarian Filiation (HICM) in Seville for their regular meeting.

The objectives and program of the weekend were announced after HICM General Directress and President of the Claretian Family, María del Mar Álvarez’s cordial welcome to those present during the meal time of the first day.

In the two remaining days, they shared and reviewed the measures taken during the last months, most especially on the intense preparation and dissemination of materials on the common Claretian Family charismatic traits. These materials are available in several languages here.

Likewise, they also started to discern the preparations for the X Claretian Family Encounter scheduled in the early days of December 2021 at the General Curia of the Missionary Sisters of St. Anthony Mary Claret in Londrina, Brazil. They hope to advance in the Claretian Family Mission-Vision in the said encounter.

Moreover, aside from discussing the 150th Death Anniversary of Claret, other common initiatives of the CF in the field of spirituality, education, and solidarity and mission were also placed on the table.

The Team appreciated the celebrations, fraternal moments. They were grateful for the exquisite welcome and the attention rendered by the host; for the stroll through the streets and city monuments with the festive Carnaval and springtime feel in the air; to the person of Constantino Rodriguez as he passes his task to Isabel Diaz, as the new Lay Claretians representative to the Team.

At the end of the meeting, with unanimous and deep gratitude, they all embraced each other and announced that Vic is the venue for the next meeting. 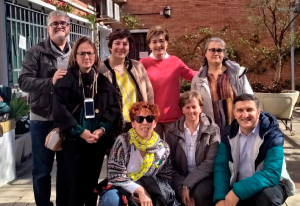