Meeting of the coordinating team of the Claretian family in Madrid

From 4 to 6 May, the first meeting of Claretian Family coordinating team (world level) took place at the Los Olivos Training Center, which have Cordimarian filiation in Madrid (Spain).

Convened by the President of the family Claretian, María del Mar Álvarez, director general of Cordimarian Filiation, attended the meeting of Madrid the members of the new coordinating team: Fanny Fernandes, of Cordimarian filiation, who will coordinate the team On behalf of the President; M ª Luisa Azor, also of filiation; Priscilla Tela, Claretian missionary (what participated in a virtual way); M ª Gracia García-Baquero, missionary of the Claretian institution; Artur Manuel Rodrigues, Missionary Claretian (with also virtual assistance), Constantino Rodríguez, by the Lay Claretian Movement, and the president herself.

During the meeting the main lines of work were established during the period 2018-2021, with a view to the preparation of the X Claretian Family meeting to be held in Londrina (Brazil) from December 4 to 9, 2021. In addition, the main activities of the beginning of this period were planned, focusing on the deepening of the charismatic common heritage of our ecclesial family.

On Sunday 6 The team was visited by Fr. Mathew Vattamattam, Superior General of the Claretians missionaries, who was interested in the progress of the coordinating team, especially by the new Web portal of the Claretian family, which is scheduled to be published on 31 of May. 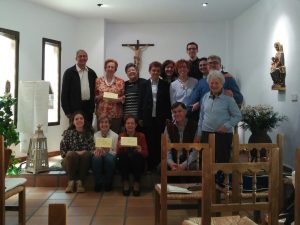 Every four years since 1984 and uninterruptedly, the main responsible for all the branches of the Claretian family have been gathering in different parts of the world to deepen the common charismatic heritage and to strengthen the relations Institutional.

In the 9th Claretian Family meeting of December 2017 in Mühlberg, Germany, María del Mar Álvarez, general director of the Daughters of the Immaculate Heart of Mary, Cordimariana filiation, was appointed as new president for the period 2017-2021.

The first actions of the new President were to elect the coordination team, to extract from the minutes of Mühlberg the agreements adopted and to make a first draft planning for the quadrennium.

Currently, they are part of the Claretian family: