60 years of love, service and gratitude!

MISSIONARIES OF SAINT ANTONIO MARIA CLARET, OF LONDRINA FOR THE WORLD

On March 19, 1958, on the blessed hill of Guanabara Park in Londrina, southern region of Brazil, a small and humble missionary seed was planted, our Congregation of the Missionaries of Saint Anthony Mary Claret, which germinated under the sun of the Eucharist, impregnated with the abundant showers of grace of the Holy Spirit of God.

A Congregation in departure from its primordiums, first from Londrina to other cities and states of Brazil, then to other countries until reaching five continents.

The missionary commemorative framework to celebrate the 60th anniversary of the Congregation was the recent foundation of the community in Sri Lanka, in Asia.

The commemoration of the 60th anniversary of the founding of the Congregation is as our Foundress, Mother Leonia, wrote on March 19, 1953: “the celebration of such an important date for the life of our Missionary Family can not limit the simple memory of a fruitful past and a hopeful present, it is also necessary to look towards the future “.

The Charism continues to be fruitful in the Church which, through the action of the Holy Spirit, also encouraged lay people to live that missionary charism, that spirituality and mission, to be in the world, light and salt. The consecrated of the Claretian Ecclesial Fraternity and the laity of the Claretian Institute of Lay Missionaries that this year celebrate the 25 years of existence in the Church, seeking to respond to the call of the Spirit to be leaven in the mass. With them, we are grateful to God for all who in one way or another are part of our missionary life, collaborating in various ways in the many projects and activities that the sisters do in the communities located in the 18 countries where we act.

We invite you to join us in the hymn of praise and thanksgiving to God for the benefits received throughout these 60 years. 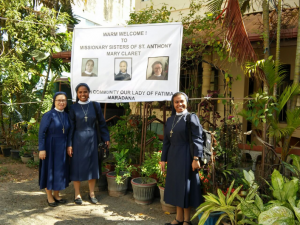 Community of the recent founding in Sri Lanka, Asia.