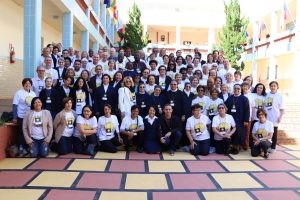 III INTERNATIONAL ASSEMBLY OF THE CHARISMATIC BRANCHES OF THE SAINT ANTONIO MARIA CLARET MISSIONARIES, ICLEM AND FEC –  FROM 07 TO 09 SEPTEMBER 2018, IN THE MOTHERHOUSE OF THE CONGREGATION – LONDRINA, PARANÁ, BRAZIL.

As the theme, “Salt of the Earth and light of the world, Disciples and Disciples in a  preaching of the Gospel everywhere” the ICLEM (Claretian Institute of Lay Missionaries) and FEC (Ecclesial Claretian) groups from different countries, such as Brazil, Chile, Argentina, Italy and Côte d`Ivoire (Africa) got together to commemorate the 25th years of these charismatic branches. FEC was built in Chile on February 11st, 1993 and ICLEM was built in Londrina on December 8th, 1993. There were 112 representatives of these different groups attending to this assembly.

The openning Mass was presided by the Archbishop of Londrina, Geremias Steinmetz, in the Marian Eucharistic Shrine of the Claretian Missionaries Motherhouse.

During the convention, the following contents were developed: Mum Ivani Matiaso Zanardi –she has showed her 25 years in this journey, remembering the first two assemblies and referring each group to its foundational orgins; Mum Dulcineia Ribeiro de Almeida has worked on the theme: “Claretian Missionary Identity“; Priest Alfiero Ceresoli, Xaveriano, from Campinas/SP, has worked with the theme: “lay/lay people in a preaching of the Gospel everywhere“.

There was a narrative of the reality of all of these different groups, pilgrimage for the charismatic places and cultural moments.

For all that we have seen and heard, we can only sing: Let there be thanksgiving and sing a new song. Praise God the Lord, praise him with love and faith.

Salt and light should be places at the service of the Gospel and the services for the poor community. The Claretian Charism is to be shared among all the brothers and sisters in all times.